The ManFisher public alpha has been released on itch.io 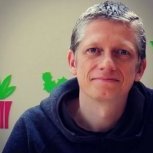