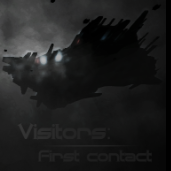 A retro sci-fi first-person/third-person shooter game that focuses on the battle between the 21st century humans and the first ever alien race visiting Earth. Before there were any of your favorite Sci-Fi films, there were the 21st century humans, encountering the first ever intelligent life beyond their planet. The player will battle the alien race - and their monster creations - with various weapons and abilities such as, rolling, sprinting, vaulting, and crouching, over the course of several missions in a single-player campaign mode, all viewable from several camera angles. Various vehicles will also be available to the player's disposal to achieve certain goals in all of the missions.